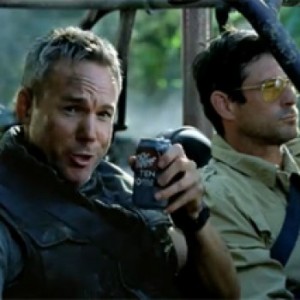 Hi! I just killed any chance this product had! Catchphrase!

Over the last couple of months, I’ve seen an ad on TV for Dr. Pepper 10, where they literally come out and say that their drink is not for women. “You can keep the romantic comedies and lady drinks. We’re good.” Assuming they continue with this marketing campaign for the life of the product, who wants to start taking bets how soon this soda gets pulled from the shelves or rebranded?

With the exception of some obvious examples that are truly only for men, you take your product’s life into your own hands when you attempt to market it as “not for women”. It’s no secret that women make the majority of buying decisions in this country, especially when it comes to food. Hey Dr. Pepper! Who do you think is bringing the soda home that men drink? Epic fail in 3 … 2 … 1…

But I could really give a flying flip about soda. You might as well be mainlining sugar or drinking anti-freeze, but I digress. So let’s bring this topic around to something that I do care about.

A lot of tech pundits still to this day are dumbfounded as to how Apple’s products such as the iPhone, iPad, and Mac have come to dominate the tech industry. To me, it’s fairly obvious. Most so-called “experts” still live in the “Old World of Technology”, where tech specs such as processor speed, screen size, quantity and variety of ports, support of every possible bleeding edge platform or protocol, and any number of other fairly trivial “features” are what define good technology. They have failed to grasp that the rest of the world has embraced the “New World of Technology” which is defined by products and services that are not only powerful, but also easy-to-use, reliable (wow is reliability important), and above all are empowering to the end-user. Yet interwoven into the rise of the New World of Technology (and it’s not just Apple) is an oh-so-subtle, yet completely game-changing phenomenon. One that is actually so obvious once it is noticed, I’m truly surprised more hasn’t been written about it. The world of technology has changed forever for one simple reason – It’s Women, Stupid!

Yes, I hate to break it to you guards of the Old World of Technology (i.e. men that have been into or working with technology for the last 30 or more years), but women have crashed our party and there’s no going back. Fittingly, it is women that have opened the proverbial Pandora’s box. And I’m not talking about the Pandora Radio service and app – although that is ironically one example of a New World technology that women are gravitating to – but I digress once again. It doesn’t take a rocket scientist (or should I say a computer engineer) to see that where most women didn’t carry smartphones, they do now. Where women didn’t spend a lot of time on computers, they ignited and now power the spread of social media. Where women didn’t buy a lot of software, they now are pouring money into apps. The world has changed, gentlemen, but instead of fighting it, I say embrace it. In this case, Pandora’s box didn’t contain the evils of the world, but rather the future of technology. And seriously, what party couldn’t use more women?

To the women of the world, on behalf of the entire technology industry, I say welcome! But first let me apologize for shutting you out for so long. I know it’s cliche, but it wasn’t you, it was us. We simply didn’t make products and services that appealed to women – to most of the world, actually. That was our fault. But we’ve entered the New World of Technology and we’re glad you’re not only along for the ride, but helping us drive forward. Please, pay no attention to the Dr. Peppers of the world, wherever they may appear. They’ll figure it out, eventually.