Steve Jobs Made the Future Real 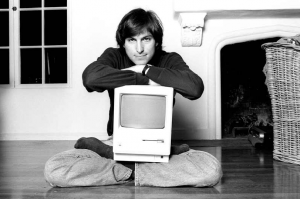 After the huge response to The “Lost” Steve Jobs Speech, I took the time to read a lot of the comments people left all over the Internet regarding the talk and the almost prophetic comments Jobs made back then. What I found was that most people were genuinely in awe of the vision Jobs possessed as far back as 1983. However, there were a fair number of people who didn’t share that sentiment.

Some people want to downplay the accomplishments of Steve Jobs. They might say he wasn’t the first to think of a certain concept or he didn’t invent the technologies himself. But that simplistic line of thinking completely misses his genius. Time after time in his career, he brought products to market that completely changed not only the technology industry, but the world as well.

No, he wasn’t the technical brain behind the Apple I and Apple II. Steve Wozniak was the one who can largely be credited with actually building those computers. But without Steve Jobs’ vision and input, the Apple I would not have been much more than a hacker’s hobby – if it ever came to fruition at all. It would have been just another footnote in the history of technology as many computer kits from that era were. It was Steve Jobs’ uncompromising view of a computer that average people could use that created the Apple II, the world’s first practical personal computer that truly ignited the personal computer revolution. Without Apple’s huge influence in creating this runaway market, the IBM PC would not have happened in the way it did. Without Steve Jobs, the PC industry would have been completely different. Even Microsoft owes its success to the genius of Jobs.

True, he didn’t invent the graphical user interface nor the computer mouse. But while those technologies were languishing unrealized in research labs – research labs of companies that didn’t have the vision to bring them to market – Steve Jobs saw the future. He envisioned a “computer for the rest of us” and set out to make it happen. While the technology industry at first derided the Macintosh as a toy, they eventually adopted the main elements of the Macintosh themselves.

The iPod wasn’t the first digital music player, nor was it necessarily the one with the best technical specifications. But it was the most consumer-friendly device and users flocked to it. If Steve Jobs had stopped there, the legacy of the iPod was that it changed the music industry forever. And that may have been enough for most people.

But Jobs wasn’t done. He recognized that mobility was the next evolution in the personal computer. While most technology “experts” thought Apple was crazy to introduce a phone in 2007, Apple did anyway and completely changed the world – again. But the iPhone was just the first punch in a technology one-two combination. As I recently uncovered, his vision for computing as far back as 1983 was for a “book” device. The iPad was Jobs’ real masterpiece. If the iPhone kickstarted The New World of Technology, the iPad entrenched it – and started closing the door on the PC era.

There is a distinction between leadership and management that many people don’t understand. Leaders provide the vision and set the direction of their organization. Managers carry out the mission that the leaders have defined. Steve Jobs was a visionary. Steve Jobs was a true leader. It is largely irrelevant that Jobs’ wasn’t the first to think of some idea or that he didn’t actually build the devices himself. He put the wheels in motion and steered the ship in the direction that he wanted it to go. Which was often a direction where others didn’t have the foresight or guts to go. Plus his uncompromising attention to detail created products that were more than just good enough. Steve Jobs wanted “insanely great” products and that is what he made sure his company delivered. That uncommon vision is why Apple is the world’s most valuable company today.

While others could talk about futuristic devices or make cardboard mock-ups or design movie props, Steve Jobs made them real. That is his legacy and we are all in his debt for his accomplishments.

previous post The Legacy of Steve Jobs, One Year Later
next post Steve Jobs Planted the Seeds of the iPad in 1988
Back to top
mobile desktop